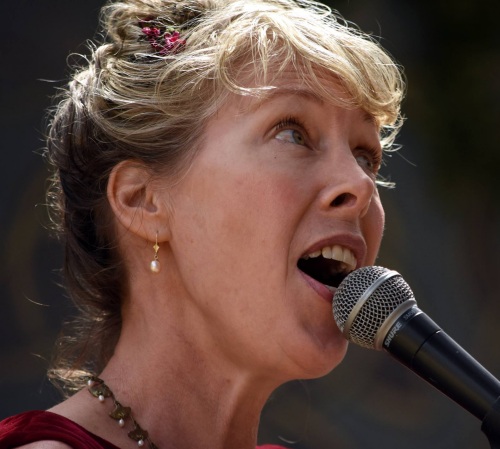 Elena Rayo hails from the Midwest, a middle-class scholar, with a Cambridge master’s degree, and a classically trained violinist from the age of five. Elena’s songs engage with heartfelt lyrics and entrancing melodies.

“While my husband Saul was very ill and dying of cancer over the past 2 and 1/2 years he would often ask me to sing for him. The songs he requested most were my originals — especially the ones I had written for and about him, so very Saul! — and those of his favorite songwriter, Joni Mitchell.

As a a singer-guitarist, learning Joni is very challenging and very satisfying to me. Naturally she has written some of the most beautiful and emotional songs ever recorded. Beyond that, even from a very young age her melodies and guitar patterns were very sophisticated. To really do Joni justice, I have had to dive deeply into her unusual guitar tunings, which she developed for herself from having a slightly crippled left fingering had. Her right hand picking/strumming hand is very strong with a syncopated style and combines many different techniques. On top of these complex musical patterns, her voice soars in gorgeous melodies with a six octave range. Learning to do those parts has brought me to a whole new level of ability, that’s for sure!

Saul helped me a great deal in the process of learning these songs. He introduced me to many of her albums I hadn’t known before. He knew the songs so well he could correct my slightest timing infraction, and would demand me to play the parts over and over until I’d “gotten it right.” We often talked about doing a Joni/Bob Dylan show together but when it became clear Saul wan’t likely to recover he urged me to create a whole evening of Joni.

For this show I’ve chosen many of Saul’s favorite songs as well as ones I got to know and love during the covid isolation times, sitting by the hospital bed. Some of the lyrics are so potent that, especially towards his end, I could not get through them without breaking down in sobs.

This performance will combine my solo playing and singing of her earlier material with the guitars in the original keys and tunings with some later material and a band. I will be joined for the second part of the evening with master pianist and keyboardist Tommy Coster, and a fabulous jazz bassist as well as a jazz drummer and special guests. (TBA)

I hope you will join me as well for a magical evening of wonderful music and songs in the beautifully artistic and newly painted the incredible murals of the Nevada Theatre in downtown Nevada City. Saul’s very first tribute show ever was performed there, an homage to CSNY, in 1994, and continued up to 2018, when we performed the last of many shows together, our Tribute to John Lennon. (Even the date of this show is magical. Saul’s time of death was recorded at 11:11, May 16, 2022.)

Paul Emery’s long series of concerts at the Theatre has been bringing the highest level of local and touring talent to the area for many years. When you attend one his his shows, you are part of the history of the very special community. He has also a very dedicated and professional team to make every performance one that you will not forget. “ — Elena Rayo