An Evening of Guitar Artistry with Brazilian, Celtic, and American Roots, with Steve Baughman & Stephen Holland.  This concert features the solo instrumental work of two renowned guitarists whose styles and repertoires are as different as can be, but whose music will make for a magnificently rich evening of immersion in the versatility of the six string guitar. 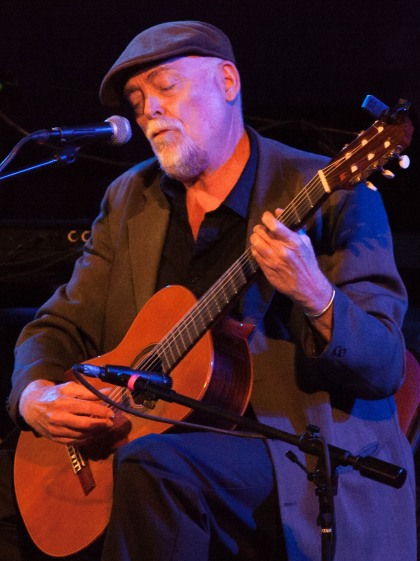 A composer, writer, performer and teacher, Stephen Holland has been performing in concert, on radio, in nightclubs and cafes for more time than he will admit. He has taught world music, the history of rock and roll, beginning and intermediate guitar, and classroom music at CSUS, Solano Community College, and a number of charter elementary schools in California.

He has traveled extensively in Latin America and Europe, performing and collecting songs. The rhythmic and harmonic invention of the music of Brazil and the romantic intensity of the Spanish-American authors of Nueva Cancion has informed his work, as has the ancient traditions of the French Troubadours, traditional Japanese Danmono-Ryu and poetry, the drummers of West Africa and the Middle East, Appalachian hill songs, the beauty of Lightin’ Hopkins, Atahualpa Yupanqui, Mercedes Sosa, Andres Segovia, and Odetta, strong coffee, and late night conversations with friends.

Stephen resides in the Sierra foothills where he grew up. He has recorded and performed with old friends and collaborators, guitarist/composer Mikail Graham, guitarist/songwriter Tom MacDonald, bassist Bill Douglass, saxophonist Gary Upton, and percussionist Kit Bailey. He also has a duo called The Brazilianaires, featuring vocalist Florencia Dunayevich. 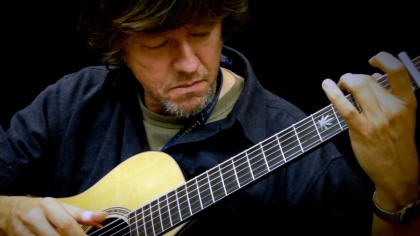 “Once in a while an album comes along that can alter your thinking about guitar music – Steve Baughman’s Farewell to Orkney is one of those….A must for all lovers of guitar and especially Celtic music.” – Acoustic Guitar Magazine

“Steve’s artistry and musicality are world-class, with dynamics, timing and interpretation that always bring out the emotional essence of the song.” – Sing Out Magazine

Steve Baughman is known for his melodic fingerstyle guitar playing, which draws on Celtic, Appalachian, and various ethnic and folk traditions, as well as his clawhammer guitar playing of old-time fiddle tunes with an infectious groove and rhythm. He was described by Dirty Linen magazine as one of the best Celtic fingerpickers in the United States.

Steve is a pioneer of the unique clawhammer guitar technique, one of the few guitarists who have taken the traditional clawhammer style of old-time banjo and made it work powerfully on the guitar as a folk, rock, funk, and blues technique. The album Clawhammer Guitar: The Collection, which features Steve and three other clawhammer guitarists, was named an “essential album” by Acoustic Guitar magazine.

Steve is also a fine composer and dynamite clawhammer banjo player. He appears with Pierre Bensusan, Martin Simpson, and Pat Kirtley on the Rounder Records Celtic guitar collection Ramble to Cashel and his duo album with Robin Bullock, Celtic Guitar Summit, was voted one of the best albums of 2003 by Acoustic Guitar magazine, which also called his album Farewell to Orkney “a must for all lovers of guitar and especially Celtic music.” Steve is a regular teacher at guitar camps across the US, including the Puget Sound Guitar Workshop, Swannanoa Gathering, and California Coast Music Camp.