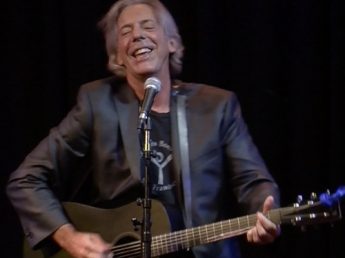 A musical score of rockin’ blues guitar underscores comedian Richard Stockton’s quest for ascension while dealing with his terror of the depths. His struggles include the divisiveness that grips our country, “we come together… like a hospital gown,” substance abuse, “My father told me vodka is odorless and winked”, and success, “I’ve been an entertainer all my life and have the resume of a man in his twenties.”

Stockton was a Nashville studio musician in his youth and uses blues tunes and song parodies as bridges between his standup rants.

“Boys, now there is a funny one.” – Ringo Starr

“Richard Stockton is off the hook. He is one of the sharpest comics working today.” – Live From LA

Singer/songwriter and notorious slacker Tom Dalldorf helped found the Beer Show on KVMR with Wesley Robertson and Mikail Graham. He spent his Covid lockup writing and performing infectious parodies on YouTube. Tom hosted Open Mic Night for many years in Hayward and wrote wine gags for Pat Paulsen back when wine could be funny.