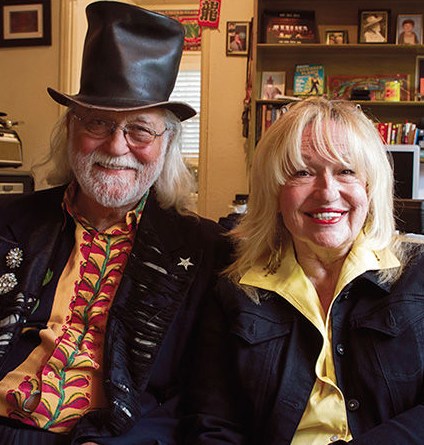 “Bob Dylan calls him ‘the hipster bebop preacher who defied all labels’. George Harrison cited him as his favourite comedian and dedicated ‘Crackerbox Palace’ to his LA abode. Jerry Garcia, Frank Zappa, Pete Townshend and Tom Waits were fans. Lenny Bruce and Charlie Parker were among his closest friends, Ornette Coleman and Dizzy Gillespie played at his memorial service and author Ken Kesey hailed him as ‘more influential than anybody'”. – Uncut Magazine

Lord Buckley (April 5, 1906 – November 12, 1960) was a stage performer, recording artist and monologist, who in the 1940s and 1950s created a character that was, according to The New York Times, “an unlikely persona … part English royalty, part Dizzy Gillespie.”

Michael Packenham, writing in The Baltimore Sun, described him as “a magnificent stand-up comedian … Buckley’s work, his very presence, projected the sense that life’s most immortal truths lie in the inextricable weaving together of love and irony — affection for all humanity married to laughter.”

Buckely’s daughter, Laurie Buckley, spent 40 years in Las Vegas, Nevada working in the entertainment business as a publicist, radio personality and activist. She worked seven years the Street Readiness program of the Nevada State Prison at Indian Springs. She is currently working on a documentary about Las Vegas showgirls. She also serves as a consultant on a documentary about her father, titled “Too Hip For The Room.”

“It’s evolved and evolved, and it’s a pleasure to see it come to a point where we are close to the debut of a wonderful tale to be told,” Laurie Buckley says about the documentary. “He was not only interesting because of his amazing possession of words. He made you laugh, and he made you think.”

Laurie Buckley and Boek agree that Lord Buckley was more than just a comedian.

“Most performers of spoken word know who Lord Buckley was,” Boek says. “Part of the reason I wanted to re-create his bits was to let other people know all about him.”

Before moving to Los Angeles in the late seventies, Boek was a well-known performer and radio personality in northern California, where he was known as Brother Lee Love of the Survival Revival Hour on KZAP-FM radio in the late sixties.

An integral part of LA’s Public Works Improvisational Theater Company since the 1970s, Lee took over as Artistic Director of the company in 2001 after founding member Marlene Rasnick’s passing. The California native, born in 1941, has had successful careers as a Fundamentalist Evangelist preacher, radio host, actor, writer, producer, union organizer, husband, father, grandfather to many & champion for the under-served & wronged. A staple of the Silverlake arts community, Lee continues to be on the forefront of accessible, socially-relevant performing arts productions

Lee has been with Public Works Improvisational Theater Company since 1979. He has helped to create, direct and perform in virtually all the original plays and performance art pieces produced by the company since then.

He has also been seen on television on Mama’s Family, Webster, Home Improvement, and MADtv.

“Lord Buckley was one the most colorful characters of the beat scene in the ’50s and ’60s. His shtick about “The Nazz” – a hip metaphoric character with Messianic qualities – and the expression of love through humor and a relaxed way of being, made quite an impression on me as a young musician in the early 1970s.  The Ludi Hinrichs Quartet is an especially magnetic and lively pairing with this event. My jazz soulmate Jim Trethefan be on the saxophones and Anna Corona – a skilled professional and delightful jazz chanteuse – will provide vocal accompaniment.” – Ludi Hinrichs

Ludi Hinrichs is most often identified with the trombone, but he is also an accomplished pianist, a vocalist and plays the didjeridu, among other musical devices.

His performances reveal a wide array of experiences— matched by a keen improviser’s ear and a commitment to his craft. From Nevada City clubs and galleries to concert halls in foreign lands, Ludi is always full of surprises.

In 2002, he performed at the prestigious Tokyo Summer Festival in collaboration with veteran Beat Poet Gary Snyder. From that unique event, a two-CD set entitled, Mountains and Rivers Without End, was produced and released.

He has also produced and released three live recorded CD’s of his own to date. Music of My Life, a retrospective work which highlights the piano influences of Monk, the microtonal studies of Harry Partch, and the trombone stylings of J.J. Johnson.

His second CD, Quintet Live, features a finely tuned combo of some of the finest jazz players in the region including bassist Greg Keranen, (“Curly “) of Johnathan Richman’s group. Check out Ludi’s scat singing on “Four.”

His 2007 release, Kairos/Kronos, includes sounds of Balinese Gamelan transposed to piano, an unusual treatment of didjeridu sounds played on trombone with a tabla accompaniment, and deep meditative journeys played on the three foot diameter Sun-Earth gong.

In 2003, Ludi introduced his Piece of Peace, a seven-movement suite that premiered at the Nevada County Composers Concert.

A recipient of the Nevada City Chamber’s 2004 Live Music Award, Ludi continues to teach, record, perform, and compose from his home on the San Juan Ridge in the Sierras.

J. Chris Olander is a poet and bio/educator who has been writing since 1980 and teaching for California Poets In the Schools since 1984. His poetry has appeared in anthologies, two chapbooks, radio and TV performances and readings from Seattle to San Diego—Hawaii to New Mexico; a tape/CD, Mass Man’s Epiphanies, was produced in 1997.