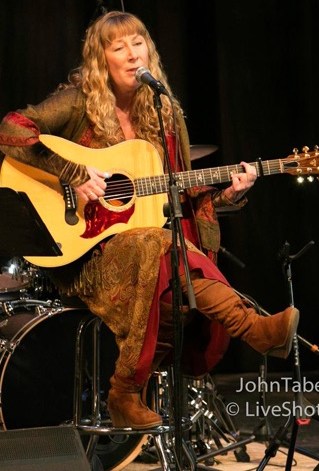 “The originality and heartfelt sincerity of Kimberly’s convictions, take the listener on a spiritual journey. Her music reflects the highs and lows of love, speaking the language of the heart. She is a very talented lady who lives with integrity and purpose.” – Diane Schuur

Kimberly Bass will be performing her original soulful music and also featuring friends, Kelly Flemming on guitar and Pat Jacobson on bass.

Kimberly is a multi-talented singer~songwriter heralding from the high mountain country of Northern California. Her melodic, heartwarming songs blend the rustic experience of a barefoot country girl, with keen lyrical insight and divine inspiration.

A versatile and accomplished vocalist, Kimberly has toured extensively throughout the United States, Canada and Japan. Her time has been spent with Grammy Winning vocalist, Diane Schuur and Grammy Nominated vocalist, Maria Muldaur. Kimberly is featured on Maria Muldaur’ s “Heart of Mine” album, the Love Songs of Bob Dylan that remained #1 on the Billboard Blues Chart (2006) for over four consecutive weeks.

Also known for her annual performances with the production of “Thousand Kisses Deep”, the music of Leonard Cohen, Kimberly continues to write and record her original songs and is currently recording two albums, one of her original compositions and the crystal singing bowls.

“…heartfelt, inspired songwriting … with a delivery both biting and assured…”  – SingOut!

Growing up in the shadow of the nation’s capital, Dave Nachmanoff cut his musical teeth on Pete Seeger, country rock, the Kingston Trio’s early revival folk, and ‘80s new wave, all melded with a soupçon of Brit folk a la Fairport Convention, John Martyn, and Ralph McTell.

Over the course of a dozen albums and countless tours, he has shared the stage with the likes of Alison Krauss, Cheryl Wheeler, Steve Forbert, Firefall, and John Wesley Harding (among many others), at venues ranging from The Bottom Line to the Glastonbury Festival. He’s also paid his dues in myriad classrooms across the United States, sharing his talents and nurturing the next generation of budding troubadours.

He also holds a Ph.D. in philosophy from the University of California. So maybe the “singer-songwriter” tag deserves to be retired in favor of “singer-philosopher,” which would place him more rightly among the likes of Randy Newman, Warren Zevon, Kris Kristofferson, and other performers whose musical output has been guided by a creative vision that extends far beyond “moon-June-spoon” lyrics and “G-D-C-Am” chord progressions.

Nachmanoff resides in Northern California, not far from the heritage vines that helped inspire his 2009 collaboration with Al Stewart (Year of the Cat), “Uncorked”.  Thirty-one years ago Nachmanoff saw Stewart live for the first time at Royal Albert Hall in London; ten years ago, he came back to that same venue and performed with Stewart.  He also collaborated with Stewart on his most recent release, “Spinoza’s Dream”.