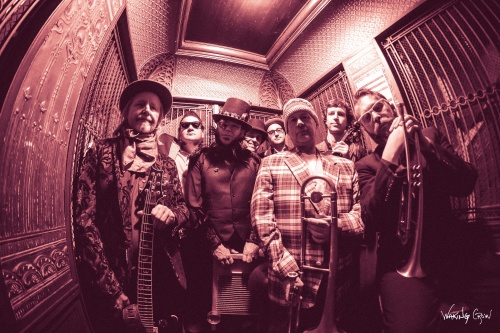 One Night Stand on Broad Street with Earles of Newtown

In celebration of their long anticipated second album, Earles of Newtown performs Broad Street Suite in its entirety on Saturday, February 5th at the historic Nevada Theatre in their hometown, Nevada City, California. With over eight years in the making, this original composition is a seamless album length suite that pays tribute to Nevada City’s main drag; its freaks and foes.

“Sounds of heart ache and rhythms of debauchery come together to arouse your attention and captivate your ears,” says founding member Earle Ford. With new releases such as, “Devil in the Details”, “DTOW” (Downtown on Whiskey) and “She Don’t Care,” Broad Street Suite embraces the dark side of the street and remnants of this eclectic mining town.

These local rabble rousers feel right at home performing at the Nevada Theatre, California’s oldest existing theater, where Mark Twain threw back shots of whiskey and took the stage for some of his first lectures, Motley Crue hitchhiked into town and launched their Anywhere USA tour and Lotta Crabtree named, “The Nation’s Darling” took to smoking thin black cigars and throwing playful remarks from this stage.

Over the years EON (Earles of Newtown) has evolved and grown into a highly acclaimed Electric Dance Jazz and NOLA Funk band. Composed of an 8-piece wrecking crew of heavy hitters recruited throughout Northern California, Earles of Newtown has earned a reputation as a feature band with the potential to fill any dance floor in any venue or music festival. They’ve performed on billings that include highly notable acts such as Dr. John, Trombone Shorty, March Fourth, Turkuaz and others.

Earles of Newtown’s focus is on great original music and providing the audience a highly entertaining stage presence featuring, the Ringmaster-like antics of lead singer/washboard expert, Chad Conner Crow and shared with band founding member Earle Ford’s solid and intense stage presence as musical director trumpet-master and co-vocalist. The band is made entirely of All-star level players that include Western Swing Hall of a Fame member, guitarist Bob Woods.

Throngs of music fans follow this high energy group, as they shake their feather dusters from the Burning Man Playa to the finest dance hall venues and festivals. Earles of Newtown owns the stage and always delivers.

As Mark Twain once said, “The doors will open at 7 o’clock, and the trouble will begin at 8.”

Broad Street Suite is a seamless album length suite paying tribute to Nevada City’s main drag and the music and characters that haunt it. Sounds of heart ache and rhythms of debauchery come together to arouse your attention and captivate your ears.