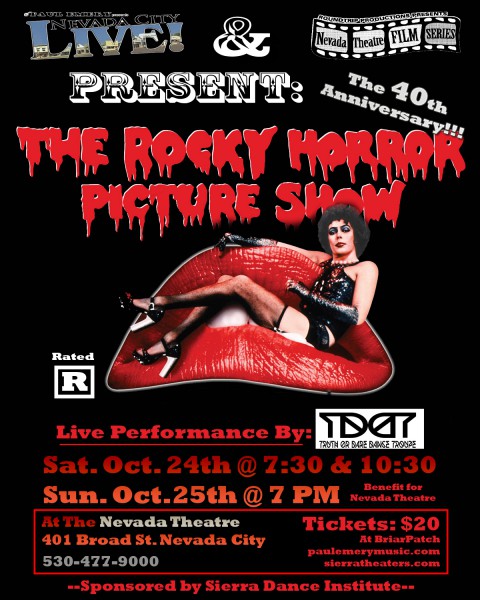 This October, come out and celebrate the 40th anniversary of the Rocky Horror Picture
Show! The Nevada Theatre Film Series and Nevada City Live present this cult classic
film complete with shadow cast by the Truth or Dare Dance Troupe performing live on
stage at the Nevada Theatre. The show goes on three times in two nights in downtown
Nevada City: Saturday, October 24 at 7:30 and 10:30 pm and Sunday, October 25 at
7:00 pm.
Rocky Horror Picture Show was the film that launched the Nevada Theatre Film Series
back in 1979, and has a cult following virtually unmatched by any other film. What
began as a flop when it opened in theaters in 1975 evolved into a phenomenon that
happened in movie theaters around the country every Saturday at midnight for decades,
and is still going on in some cities today.
“If you’ve never seen Rocky Horror live on a stage, you’ve never seen Rocky Horror,”
says Heather Bewsee, director of Truth or Dare. As Brad (Barry Bostwick) and Janet
(Susan Sarandon) come upon the creepy castle of flamboyant transvestite scientist Dr.
Frank-N-Furter (Tim Curry) on the big screen, their counterparts on stage will act it all
out for you in living flesh. The show features tongue-in-cheek comedy and Broadway
style song and dance, with plenty of audience participation. Audiences are invited to
come as you are or dressed up and ready to do the Time Warp all over again!
Truth or Dare Dance Troupe is a Nevada County based dance ensemble that mixes all
styles of performance in a perfectly balanced blend of dance, talent, and creativity. The
atmosphere is electric with their unique dance performances that push the edge
between sexy and classy. Founded by Heather Bewsee in 2013, Truth or Dare has
been performing up and down the west coast entertaining audiences of all shapes and
sizes with their varied repertoire of classical, burlesque, and fusion dance styles