TICKETS WILL BE AVAILABLE
AT THE DOOR TONIGHT!
PLAY BALL! 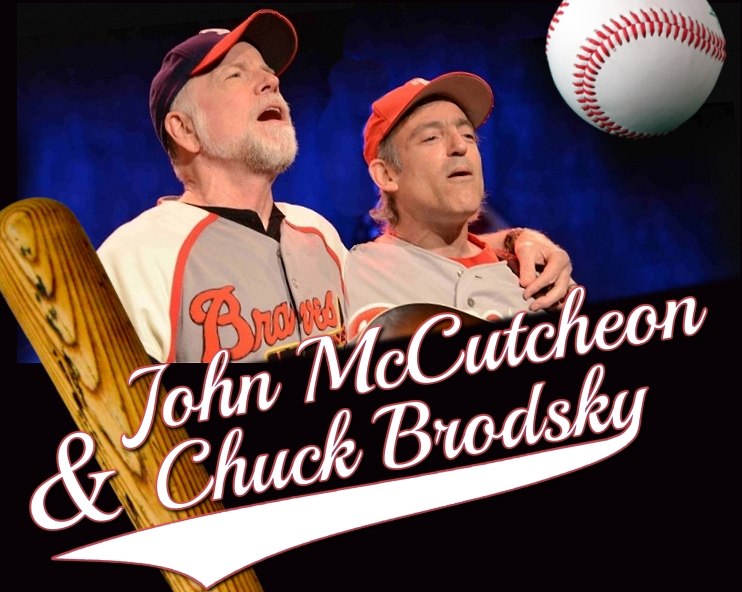 The event has become an annual tradition at Eddie’s Attic – a renowned folk music venue in Atlanta.

John McCutcheon, noted folkie and multi-instrumentalist, will represent the away team at and Philadelphia native Chuck Brodsky, relocated to Asheville, N.C., is the home team. Brodsky and McCutcheon are friends and prolific writers of songs about baseball, enough for a full album each.

Among the tunes in Brodsky’s lineup are “Death Row All Stars,” about a team from the Wyoming state penitentiary playing for their lives, and “Dock Ellis’s No-No,” a ballad about the Pittsburgh Pirates pitcher who threw a no-hitter while under the influence of psychedelics.

McCutcheon, a Wisconsin native, will dress out in an old Milwaukee Braves uniform and might deliver his “Talking Yogi Talk” or “Doing My Job,” the latter a tuneful account of Cal Ripken’s memorable speech after he broke Lou Gehrig’s record for most consecutive games played.

“One of the finest singer- songwriters in America. There are a lot of good ones, but when it comes to the really great ones it boils down to a select few – he’s one of them.” – Mountain Stage (NPR)

“One of the greatest storytelling artists we know…
We dig Chuck Brodsky.” -Asheville Citizen-Times

The musical storyteller, Chuck Brodsky, is well known for his soulful strumming and fingerpicking skills that resemble the heart and soul of North Carolina’s traditional folk.

Brodsky has appeared on nationally syndicated radio programs like “Mountain Stage,” “Acoustic Cafe,” and “River City Folk,” and has performed three concerts of his celebrated baseball story songs at the National Baseball Hall of Fame.

Folk and grassroots singer-songwriter, John McCutcheon, is a master of many different traditional instruments, a notable children’s author, and the winner of 6 Grammy nominations.

With a strong passion for music education, he has produced over twenty albums for other artists, from traditional fiddlers to contemporary singer-songwriters, to educational and documentary works.

Having been compared to Will Rogers and Garrison Keillor, The Washington Post described John as, “Folk music’s rustic renaissance man.”

His work has taken him all over the world, but one of his latest albums, “Passage,” was partly recorded right here in Decatur with the help of Suzy Bogguss, Tim O’Brien, Stuart Duncan, Mollie O’Brien, and John Jennings.

presented with support from

presented with support from