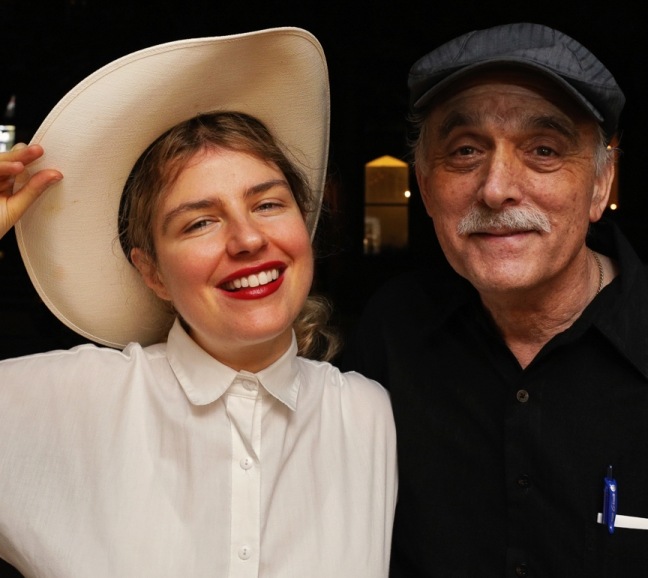 The pair joined forces in 2014 for a collection of vintage American music on the album “Come On In”. They are coming together again to perform classics and favorites that pull from their Jug Band and Americana roots.

“Jim sounds as fresh as ever and it’s sure to place a smile on your face with his choice collection of classics and some great humour along the way.” – Alex Gallacher, Folk Radio UK

Jim Kweskin is the founder of the legendary 1960s Jim Kweskin Jug Band with Fritz Richmond, Geoff Muldaur, Maria Muldaur, Mel Lyman and Bruno Wolfe. During the five years they were together, they successfully transformed the sounds of pre-World War II rural music into a springboard for their good-humored performances. Their imitators were legion, including a San Francisco jug band that became the Grateful Dead, a Los Angeles jug band that became the Nitty Gritty Dirt Band, and a New York jug band that became the Lovin’ Spoonful. No other group attained their unique blend of youthful energy and antiquarian expertise, tight musicianship, loose camaraderie, and infectious swing.https://youtu.be/-uw41o9cdW0These days Jim is best known as a singer and bandleader, but he also created one of the bedrock guitar styles of the folk revival, adapting the ragtime-blues fingerpicking of artists like Mississippi John Hurt and Pink Anderson to the more complex chords of pop and jazz. He has maintained a remarkably consistent musical vision since his jug band days, continuing to explore traditional folk and blues with the sophisticated sensibility of a jazz musician, and jazz with the communal simplicity of a folk artist. He has recorded many solo ventures, as a member of the U and I band, with band-mate Geoff Muldaur, with Samoa Wilson, with The Texas Sheiks as well as performing and recording with a wide variety of well-known musicians such as Maria Muldaur, John Sebastian, David Grisman, Cindy Cashdollar, Happy Traum, Meredith Axelrod, Juli Crockett and Samoa Wilson, to name a few.

Jim Kweskin’s shows radiate charm, humor, sophistication and talent. Jim sings a collection of familiar songs by Benny Goodman, Johnny Mercer, the Sons of the Pioneers, Fats Waller, and Somethin’ Smith & the Redheads. There’s an endearing sense of good humor to Kweskin’s interpretations that makes his performances a delight. Because of his vast repertoire and love of the music, Kweskin is recognized as one of the best interpreters of the great American songbook.

“Meredith Axelrod sings and plays guitar as if she really returned to the pre-mic days. We’re not talking revisionist copy of so and so from way back when; we’re talking as if we plucked an original out of the era and time-traveled…” – JL Stiles

“It takes more than passion to do what Meredith does. It takes guts; conviction. She is unflinchingly committed to authentic recreation of the tunes in her repertoire–swampy blues and early American roots music.” – Gary Rametta

Delightfully engaging and unassumingly comic, Meredith Axelrod envisions the limitless potential of early twentieth century music, whether it be Ragtime, Music Hall, Pop Standard, Boogie Woogie, Tin Pan Alley, String band, Jazz, Country, Blues or even Jug Band music, and embodies the spirit that brought the music into existence in the first place. Her vocal style is unusual, probably because she learned to sing by listening to how folks did it a century ago – through the medium of cylinders and 78-rpm records.

The dominant theme throughout her expansive repertoire, is that, whatever the genre, these are songs she learns from the original sources (records and / or sheet music) which were released between the 1890s and the 1930s. Part of the allure of old time music, indeed any music throughout the history of recorded music, is hearing the original recordings as played and sung by the original performers in their heyday, loving what they’re doing and doing it because it means something to them in that moment, never because of nostalgia, and Meredith brings the same unbridled passion, earnest devotion and candid vitality to all of her music; she has found possibility and joy in the treasures of cultural folklore.