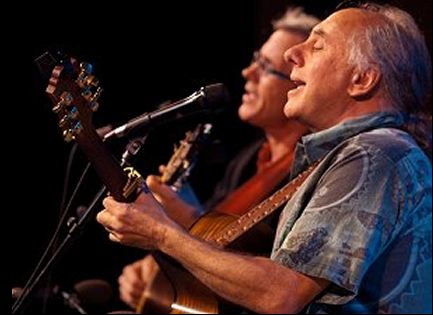 Peter & Paul have performed together since the early 1980s as the Fun Train Minstrels and in various combinations.

Paul Emery is a member of Backwoods Jazz with Anni McCann and Tom Schmidt. He is creator of 1000 Kisses Deep – The Songs of Leonard Cohen, which has performed around Northern California to sell-out crowds. Paul is also a founding member of the Foothills Flyers duo with Ray Mann and the ground-breaking Greater Carmichael String Band. His production company, Paul Emery Presents, has been an essential part of Nevada County’s vibrant music scene for decades.

Peter Wilson is a singer/songwriter/guitarist with several recordings to his credit. He’s a member of the Deadbeats playing the music of the Grateful Dead. Peter has written, recorded and toured with Mountain John Hilligoss and Moe Dixon in the trio Troubadour Camp. He’s a featured member of Paul Emery’s 1000 Kisses Deep ensemble. His production company, Strings Concerts, presents curated folk music concerts by international touring artists.