“Deeply nestled in the hollow hills & emerald mushroom moss of grey skied glens & fens, there lived Theodora Willowand. She was all that is fragrant with beauty & glamour, innocent as the stars are white, all that is untainted with purity & goodness & she was even sparkling with crystal dew drops to everyone’s delight.  Yet she had a twin brother named Thistlethorn Witherwand & he was all that is poison & mischief, all that is malevolent with spite, all that is prickly & fraught with the splinter of night…”

Make Believe is loosely based upon the real life Wild sisters who lived next door to the Brothers Grimm. From these 6 sisters the brothers, Jacob & Wilhelm Grimm, collected many of the fairy tales we know today such as Rumpelstilzchen, Cinderella, Sleeping Beauty, Rapunzel, Hansel & Gretel, The Singling Bone and more.

Make Believe too concerns our audience with 6 sisters, each one different from the next. There is the eldest Wendel of tickling paintbrush potions, Wanda of the ineffable riddles, Winky of tea cup sipperies, Florence of cartwheelic fripperies, Fern of superstitious rabbits feet & little Fand, of book wormery word hoards.

“So when Theodora married & gave birth to daughters six, Thistletorns malice grew & he was filled with even more maliciousness. He crept into Theodora’s rath one bent & twisted night & as quick as it takes for an eyelid to wink, all six girls were gone in a blink. Out of the gentle world of twilight & shade, into the world of people they came. And no more than babes he laid them on the steps, of a run down orphanage called, the lonely birds nest…”

Make Believe is Dalrymple MacAlpin’s orchestral foray into the inheritance of archetypal alchemy and its continuing influence upon the evolving imagination. Make Believe speaks to us in a vibrant language of symbolism and poetic incantation. The written word is painted with playful splashes of myriad hue and texture. Here the instinctive soul takes precedence over the ordinary and yields new forms of insight, which stretch the ears towards unforeseen fragments of clouded memory.

Within Make Believe we are introduced to the Green-man, disgorger of midsummer destinies, The Great God Pan, Arcadian piper at the gates of dawn, GogMagog, British beanstalk giants of macrocosmic dimensions, Baba Yaga, the chicken foot dwelling mother of iron teethed witches and Willy Wonka, the ineffable trickster ferryman himself.

The play also coincides with the release of a double vinyl LP and CD by Dalrymple MacAlpin, 3 years in the making, featuring 35 musicians, 2 choirs, all the songs from the play & an original cover painting by Benjamin A. Vierling. 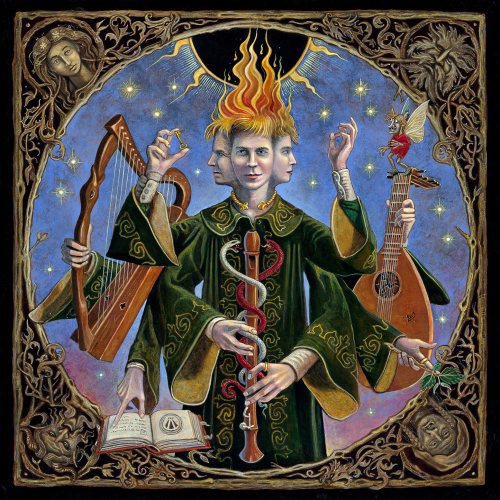 Dalrymple MacAlpin – The Storyteller, The Green man & The Trickster Ferryman

John Ames – The Giant Gog & Basso Profundo oktavist in the orchestra.
John is a renowned opera singer having appeared in countless roles from Wagner’s Ring Cycle, Stravinsky’s Les Noces & Mozart’s Requiem to name but a few.