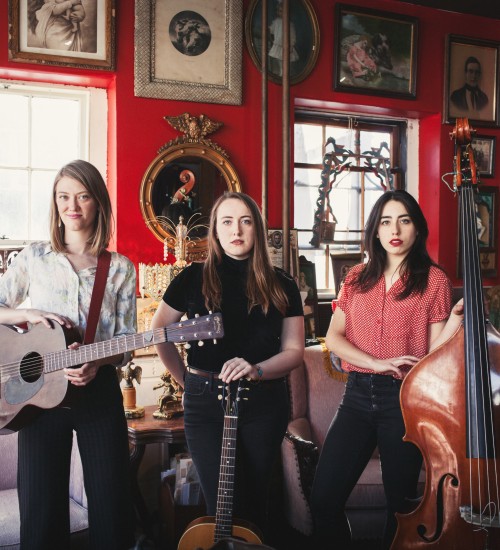 “In an age where so much music feels trite and phoned in, Lula Wiles emerges with their own unique blend of honest lyrics and gorgeous singing.”    – Aoife O’Donovan

“These young women […] will be a huge force on the Americana music scene for many years to come. The chemistry they bring to the stage is a joy to behold.”   – No Depression

“The harmonies, the attitude, the musicianship. These 3 young ladies absolutely KILL it and do so without breaking a sweat… This trio is probably my personal favorite new act of the year.”   – Red Line Roots

“With one whispered harmony, new Boston-based trio Lula Wiles can stop you in your tracks. Their debut release has a mesmerizing charm, filled with songs that hearken back to the classic era of folk and country.”   – Twangville

What will we do? For Lula Wiles, the trio made up of Isa Burke, Eleanor Buckland, and Mali Obomsawin, the question is central to the creation of their music—and it’s the title of their sophomore album, out in 2019 on Smithsonian Folkways Recordings.

“We wanted to make an album that reflected, in a current way, what we are all staying up late thinking about and talking about over drinks at the dinner table,” says Obomsawin. “What is everyone worried about, confiding in their friends about, losing sleep about?”

Anchoring the band’s sharp, provocative songcraft is a mastery of folk music, and a willingness to subvert its hallowed conventions. They infuse their songs with distinctly modern sounds: pop hooks, distorted electric guitars, and dissonant multi-layered vocals, all employed in the service of songs that reclaim folk music in their own voice.

The musicians take turns in different roles––Burke and Buckland on guitar and fiddle, Obomsawin on bass, all three singing and writing—but no matter who’s playing what, they operate in close tandem.

All three members grew up in small-town Maine, and the band came of age in Boston’s lively roots scene. Since then, they have toured internationally, winning fans at the Newport Folk Festival and the Philadelphia Folk Festival, garnering acclaim from NPR Music and a Boston Music Awards nomination, and sharing stages with the likes of Aoife O’Donovan, the Wood Brothers, and Tim O’Brien.

Lula Wiles exists in the tense space where tradition and revolution meet, from which their harmonies rise into the air to create new American music.