Due to power outage the October 23 Johathan Richman concert is rescheduled for Tuesday, November 5.  If you have tickets they will be honored for the November 5 show. If you would prefer to receive a refund, please email paulemerymusic@yahoo.com. 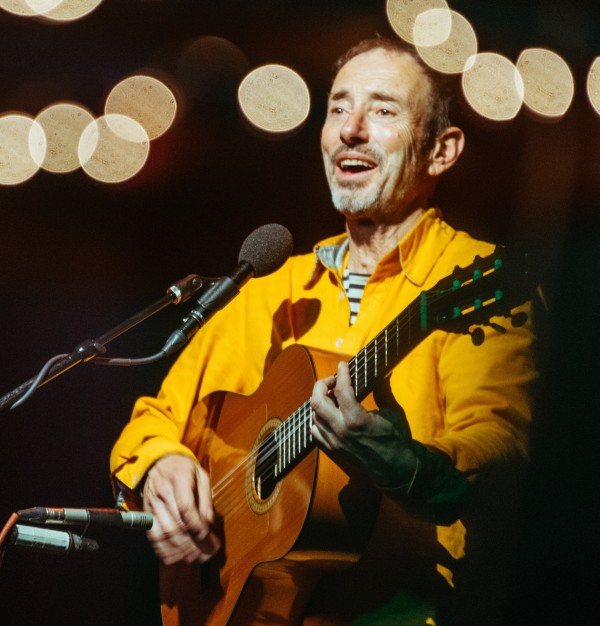 Jonathan Richman has been playing music, recording and touring for most of his life. Jonathan and his drummer Tommy Larkins win fans wherever they play. In the early 1970s, Jonathan formed the noted band The Modern Lovers. Tommy Larkins was in the groups Naked Prey, Giant Sand and other popular bands in Tucson, Arizona.

“The music we’re doing now works well in quiet places like theaters and performing art centers. We still don’t use a program or a set list so we don’t know what we’ll do until we do it. Please do not expect old songs. Many singers my age do a retrospective; this show is not like that. It’s mostly stuff made up in the last 3 and 4 years. Some of the songs presented might be in different languages; this is not to be esoteric or clever, it’s because the different languages help me express different feelings sometimes.

One last thing, my idea of a good show has nothing to do with applause. It’s about if all the songs I sang that night were ones that I felt.”

A singer and songwriter who has stubbornly (and joyfully) followed his muse in a career that began in the early ’70s, Jonathan Richman started out as a primitive proto-punk bandleader under the influence of the Velvet Underground who would eventually mature into an acoustic balladeer, and who sang his spare, passionate tunes in Spanish as often as in English. In the middle, Richman was known for his purposefully naive music that reveled in a childlike love of the world around him, emphasized by a voice that was by turns craggy and adenoidal.

Richman’s work with the first incarnation of Modern Lovers is a major influence on punk rock. One critic called him the “Godfather of Punk”. Artists as diverse as the Sex Pistols and Joan Jett have covered “Roadrunner”. Boston ska-punk band Big D and the Kids Table have covered “New England” live and on their Gypsy Hill EP. A version of “Pablo Picasso” performed by Burning Sensations was included in the 1984 cult film, Repo Man. David Bowie covered “Pablo Picasso” on his album Reality. Velvet Underground founding member John Cale has a version of the song on his 1975 album, Helen of Troy, and continues to include the song in his live shows. Iggy Pop has performed “Pablo Picasso” live and wrote an extra verse for it. Echo and the Bunnymen covered “She Cracked” in concert in 1984 and 1985 and Siouxsie and the Banshees have a version of the song on Downside Up.

Richman’s music has set the tone for many alternative rock bands, such as Violent Femmes, Galaxie 500, They Might Be Giants (“Roadrunner” reportedly inspired John Flansburgh to become a musician), Weezer, Tullycraft, Jens Lekman, singer Frank Black (who composed the tribute song “The Man Who Was Too Loud”), Brandon Flowers, Art Brut, Craig Finn of the Hold Steady & Lifter Puller, Mac DeMarco and Nerf Herder who composed a song about him, titled “Jonathan”, which appeared on the band’s second album How To Meet Girls. British country rock band the Rockingbirds released the single “Jonathan, Jonathan” in tribute to Richman in 1992. The Silos also covered the Modern Lovers’ “I’m Straight”.

As a producer himself, Richman and drummer Tommy Larkins produced Vic Chesnutt’s final album Skitter on Take-Off in 2009 which appeared on Vapor Records. Chesnutt opened for Richman at concerts many times during his later years.

“Roadrunner” is on the School of Rock soundtrack. In the commentary, director Richard Linklater mentions it is often called “the first punk song” and wanted to include it for that reason, along with all the other seminal rock songs in that film.