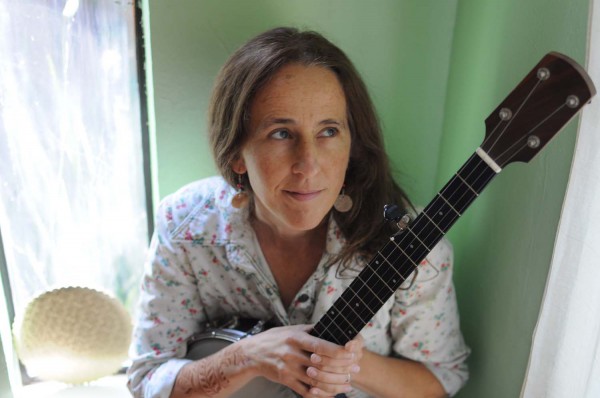 For over a decade, Rita Hosking has been a force of nature in the acoustic Cali-Americana music scene.  A descendant of Cornish miners who sang in the mines, Hosking grew up with deep regard for folk music and the power of the voice.  From festivals (Strawberry Music Festival, Father’s Day Bluegrass Festival) to hometown theatres (Palms Theatre, Center for the Arts), she has captivated audiences around the globe with her doubly sweet and sinewy voice and stories of forest fires, culture clashes, demolition derbies, working class, and hope.

This Friday, Hosking will perform her latest album Frankie and the No-Go Road in its entirely, as part of the Nevada City Live Concert Series presented by Paul Emery at the historic Nevada Theatre.

“I was flying back from tour and I was doodling on a piece of paper.  After a while I realized I was illustrating a hero’s journey and something about that really stuck with me,” says Hosking from her home in Davis, CA.  “For my sixth album I was looking to do something different.  There is this gravitation towards singles in the music industry, and I wanted to go against the flow and make a concept album.”

Frankie and the No-Go Road is a collection of twelve songs based on twelve steps of the Hero’s Journey.  While in college, Hosking studied the American scholar Joseph Campbell and the pattern of narrative he identified as the Hero’s Journey, which appears in drama, storytelling, myth, religious ritual, and psychological development.  She was also deeply inspired by a favorite professor, Dr. Whalen Lai, who exposed her to the psychology of dreams.  She went with the idea and found the process exciting, motivating and even cathartic.

Hosking headed to Austin, TX to record Frankie and the No-Go Road with producer Rich Brotherton at Ace Recording.  Joining her on the album are esteemed session players Glenn Fukunaga (upright bass), Dony Wynn (drums), along with members of her band (and family) including husband Sean Feder (lap steel, dobro, banjo), daughter Kora Feder (vocals) and Andy Lentz (fiddle).  In keeping with the hero’s journey each song was recorded in the order of the twelve steps.

When asked if there was a particular step in the journey that stood out for her, Hosking replied, “The Reward, where the hero is suppose to receive some kind of reward; a shiny sword or ring, or some piece of knowledge.”

Her reward is an album that is a beautifully bold and exquisitely told revitalization of the American spirit as seen through the hero’s journey.  And her piece of knowledge – to follow her instincts and “let my freak flag fly.”

“A soulful howl from the mountains.” — California Bluegrass Association

“I’ve put on quite a few shows over the years, and by far Rita Hosking’s was on of my favorites.” — Pat Becker, Little River Inn

“There’s a grit to her songs and sinewy toughness to her voice that weave their own spell.” — Q Magazine

“Rita Hosking is amazing! I highly recommend her to any and all!” — Audrey Spector, Berkeley, CA concert presenter