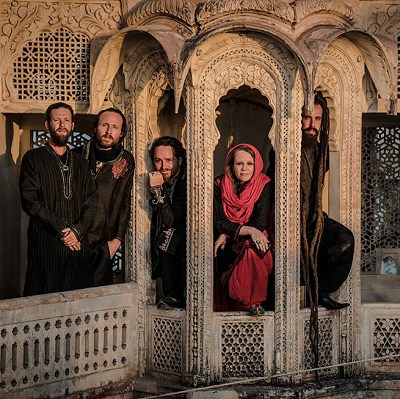 Local Sufi musicians Fanna-Fi-Allah carry the ancient tradition of Sufi Qawwali to audiences throughout the world, offering people a way to connect to a place of deep devotion and mystical prayer. Sung with a powerful and soaring melodious chorus and accompanied by entrancing tabla rhythms – this is a music that celebrates the rich and vibrant Sufi culture of India and Pakistan.

Qawwali music is a passionate devotional practice in which the fire of divine love (ishq) is ecstatically expressed through the mystical verses of Sufi poets, sung in Urdu, Farsi, Hindi and Punjabi. The origins of Qawwali music date back about a thousand years to the first sufi mystics who came to India. It has evolved into an immense art form spanning hundreds of years of poets, languages & musical evolutions. Fanna-Fi-Allah have been blessed to play qawwali at numerous Sufi tombs throughout the Indian subcontinent, as well as at festivals and cultural events all around the world. They are working to keep the flame of this music alive through their performances, the personal connections they make and through a documentary about Qawwal (Music of the Mystics) which is due to be completed later this year.

​Come join them for the last local show of the year, at the end of a huge 2018 tour (that has included the West Coast, East Coast & Midwest of USA, plus India, Bali, Russia & China). This year they are celebrating their 2nd Vinyl and 11th CD, which will be officially release in Paris, France in October.