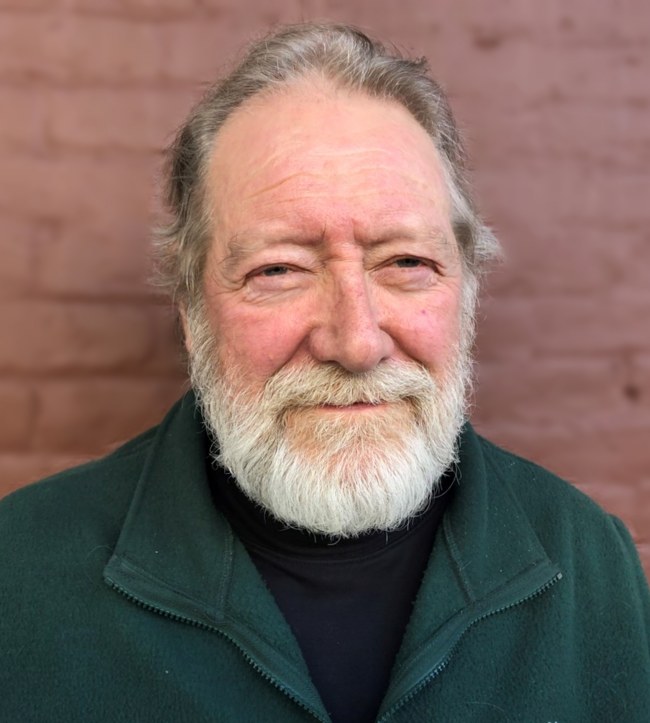 “Dachtler’s poetry is raw and snappy as a northern wind, filled with spicy imagery and plenty of tongue-in-cheek humor… When I was listening to Dachtler, I felt like he was presenting some backstory that the millions who cut their environmental teeth on Turtle Island would love to hear. I sure did.” – Bob Yehling – Word Journeys

“Daily life means “Drink your coffee and eat your beans” the zen text says.  Here in Doc’s book the quirky lives of farmers, ranchers, miners and new settlers of the Sierra Nevada comes through funny and bare.  What an ear!  And what a calm and compassionate sense of work and love shores up these well-dug poems and stories.” – Gary Snyder

Doc Dachtler is the author of four books – Drawknife, Konocti Press, 1985, Waiting for Chains at Pearl’s, Plain View Press, 1990, Skidmarks and Snowgeese, Larkspur Press, 2011, and Why Am I Telling You This?, Longhouse Press, 2019; as well as two music albums: Too Funky For You, Lost Dog Records, 1987 and The Buffalo Freeway, Lost Dog Records, 1988. 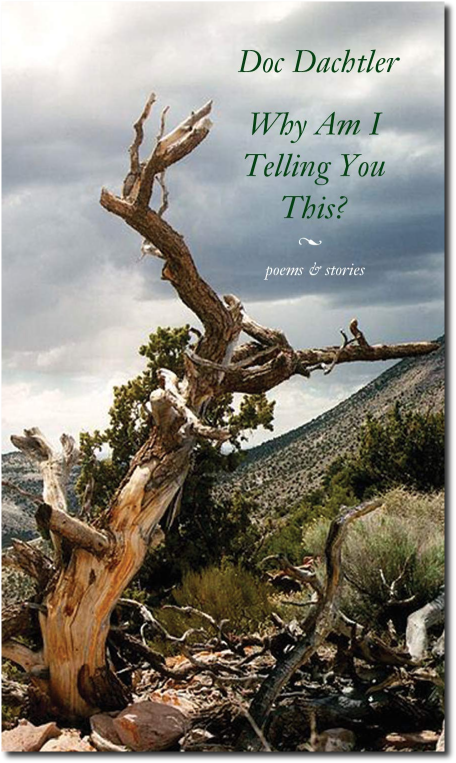 By 1967 Doc had shot through UC Davis with a degree in philosophy, his main interest was metaphysics, as well as playing the drums in a rock group known as the Nomads.  The group played frat dances and parties; maybe you were there?  Within a year Doc had moved to the San Juan Ridge in Nevada County to work as an elementary teacher in their one room schoolhouse built in 1875.  Did these kids know what was in their midst?  They soon would, and so would the community where Doc served ten years as the Nevada County Planning Commissioner, forever wishing to practice ecological well being.

Since 1985 Doc has published three books of poems and recorded two music albums, and at an age, roughly 35, when most in the literary world have mucked through their wild years and dumb jobs and now want something cushy, Doc went against type and took up carpentering, which he stayed at steadily until he retired in 2010, having worked at many intriguing projects from restoring the Nevada City Firehouse #1, likewise the 1885 hanging gallows of Downieville, California, ship-shaping the North Columbia Schoolhouse, then the Coughlan ranch house across the street, plus nailing up Habitat for Humanity houses, and saving Nevada City’s United Methodist Church (1862).  Never mind multiple structures Doc has worked on solo or with a crew where as he says, “dry rot, fungus, termites, high wind and gravity never forget what to do.”  The poet and storyteller’s been there.  Now he’s coming to you.”

– Bob Arnold, 5 August ’18, Vermont – From the introduction to Why Am I Telling You This?

in addition to her memoir, Reclaiming My Decade Lost in Scientology (Counterpoint), Sands is the author of the novel Catching Heaven (Ballantine), a Penguin/Random House Reader’s Circle Selection and a Willa Award Finalist for Best Contemporary Fiction; and a book of writing essays and exercises, Tools of the Writer’s Craft (Moving Finger). Her plays include an adaptation of Louisa May Alcott’s Little Women, which recently enjoyed its tenth production, and the comic/drama Fair Use, which explores the “was it plagiarism?” controversy surrounding Wallace Stegner’s novel, Angle of Repose.

Sands is also a singer/songwriter; she recently produced her first CD, Rustler’s Moon, and performs widely. Also a theatre artist, her directing experience runs the gamut from Shakespeare to Giradoux to new works by new playwrights, and she has an extensive acting resume. A popular teacher, she leads workshops and lectures for such conferences as the Community of Writers at Squaw Valley and the Iowa Summer Writing Festival. Sands is Professor Emeritus, Franklin & Marshall College, in Lancaster, PA; she is also the editor of the F&M Alumni Arts Review. She lives in the foothills of California’s Sierra Nevada.