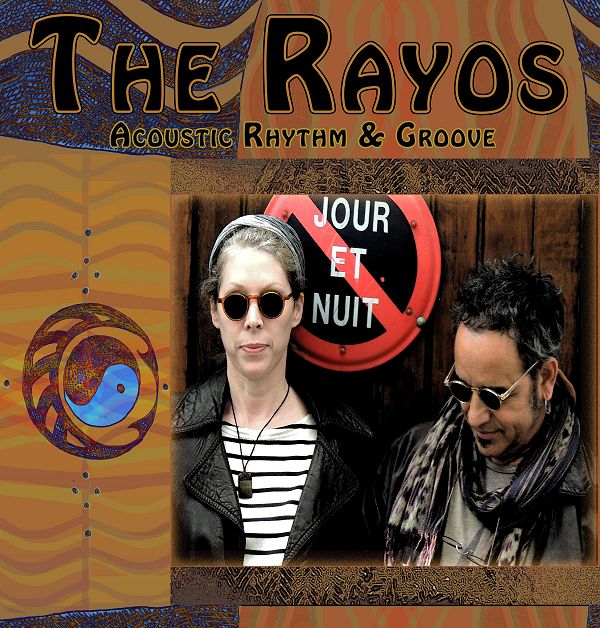 Saul & Elena Rayo bring their songwriting and musical talents as a duo to far more than just a musical experience for the audience.

Using a wide variety of instruments, including guitar, bass, violin, viola, piano, and percussion they sing and play on each other’s songs. The sound of the blend of their voices together is often described by audience members as the highlight of their experience. Together they are an inspiration for their individual talents, and to be admired how they work together musically, and also as a couple personally.

They individually have released many albums of their original songs, performed countless concerts of both their own music and tributes to the greatest musical artists of our time.

Yin/yang? Saul and Elena have a musical marriage that is a very rare thing in today’s world.

The  Rayos: with the Rhythm & Groove Orkestra : Songs of Love and Politics

Saul and Elena, what does this concert at the Nevada Theater on May 6 mean for you?

Saul says, “This is an album release party for our new record called “Deeper Roots” named for one of Elena’s songs, see? I’m not such an ego-maniac.” I love and wanted the Nevada Theater because the acoustics and the vibe there are amazing. The Nevada Theatre is where I performed my first Tribute show CS&N, over twenty years ago, and many since. It just FEELS so good there.  I’m a musical chameleon, so playing everything from Dylan to to the Doors is natural to me, but now its about our music, getting down to the details. It’s about how Elena and I write, individually and together, Love & Politics . We truly support each other, and this is what we are as a couple, and how we are musically.  We both have a lot to say about love, and the condition of the planet. WE JUST WANT EVERYONE TO WIN!”  (Elena and Saul got married in 2014 and became The Rayos).

For a blast from the past, check out one of Saul’s first shows at the Nevada Theater, the original Ray-O-Sun Orkestra, in 1995, doing a daring and impressive live version of “I am the Walrus.”

Who are your “cast of musicians” this time around?

Elena : “Our beautiful band is “The Rhythm & Groove Orchestra” and we are in heaven. Our bandmates are made up of our dearest friends and supporters of many years: The Rayos are back together with some members of Saul’s band Cocina del Mundo from 10 years ago.”

Saul: On Joe Thayer ( acoustic fretless bass): “Ahhh Joe…We go back over 20 years. I had a band who had jumped ship not wanting to play my original music and I had booked a venue for a concert…Uh-oh! Joe appeared and volunteered to play bass. used to call me everyday to see if I had written any new songs and would come right over and we’d shake them out.

Lou Meyer (keyboards & vocals)  and Thomas Schuebel (acoustic lead guitar& vocals) We have a natural symbiosis together. Those two really get me, and how to make the kind of sounds that go with our songs just perfectly.

Gary Greenberg: He’s a conga master. And a percussion master.  And just a sweetheart.  He watches my body language and musically cues off of me. Feels great!

Kim Kinjo and Janice Polucha (harmony vocals and percussion).  These two women are incredible. Working on the complex, eclectic vocal arrangements and harmonies that we have is a challenge, and completely satisfying to listen back to. Love does make beautiful music.

Bruce Wheelock (cajon, hand drums): We’ve recorded at Flying Whale for so many songs over the years … who but Bruce to really get down to the groove!

We LOVE these guys and they love our music, and it really comes through in the songs! “

So, talk about the new album “Deeper Roots.”

Saul continues: “The tribute shows are the bar for excellence in performance, but now it’s our turn.  Going back to our “Deeper Roots,” this concert is all acoustic but jivey. Everything we do is groove-oriented and danceable, even the ballads. The songs come naturally and always reflect our real life experiences.  When I first heard Elena’s songs, I totally got it. Lyrically, timing and phrasing…very original, great songs. Then I got her…..mmmm. ”

Elena, “We’ve been working on and in our recording studio Ancient Wave for a few years, in search of the sound that we both have loved our whole lives, those vinyl records from the 1960s.  In my life, music kept getting progressively digital,and sounding like crap. Over the years years I drug around this 300 pound 16 track tape machine,  without really knowing what I was going to do with them.  So I beat Saul over the head with that tape machine till he got how recording analog really does make a difference. ”

We record live with the band in the same room at the same time. Magic can happen in a live setting, from the interaction with everyone.  Each song is very alive, and has a completely different character.  It’s like there is a whole crowd of these people up on the stage with us, and they are the songs. And there is a opening of the heart and mind at a live performance that can only happen within that particular moment.”

“We always go for the soul of the music. Factual fables. Fearlessness in creativity. Sophisticated simplicity. Bukra music.

We’ve always strived for the best.”