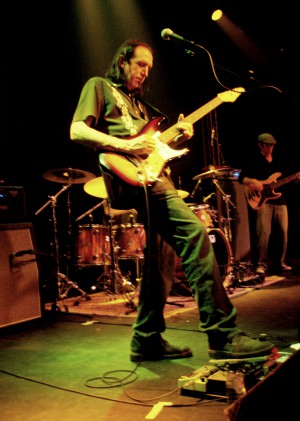 Man for man, you would be extremely hard pressed to find a trio more capable, more accomplished, more musically imaginative and simply more formidably jaw dropping than one comprising guitarist Michael Landau, bassist Reggie Hamilton and drummer Gary Novak—one of several permutations of the estimable Michael Landau Group. When it comes to consummate musicianship, each is a total monster, and showed as much during their Fender Studio Session at Capitol Records.

Landau is a renowned and long-acclaimed Los Angeles session ace who has played on hundreds of albums since the early 1980s, with artists as varied as Miles Davis, Michael Jackson, B.B. King, Joni Mitchell, Pink Floyd, Seal and James Taylor, to name only a few. Landau has also fronted several bands, including the Raging Honkies, Burning Water, the Ringers, Renegade Creation (with fellow guitar great Robben Ford) and his own Michael Landau Group, which is variously composed of Landau and whatever ace rhythm section and special guests he recruits.

Listing Landau’s lengthy credits is impressive, but doesn’t fully do him justice. It’s one thing to note his resume, but it’s quite another to watch him live in action. Make it a small room like, say, the Baked Potato, a cramped little L.A. music hotspot that Landau and his group regularly burn down whenever he’s not busy elsewhere. That’s when you really get the full effect of Landau’s mastery of the guitar and whatever musical vein he’s mining at the moment, be it rock, electric jazz, instrumental experimentation or pretty much anything else.

He could play a gazillion notes per minute if he wanted to, but he seldom does. Landau’s phrasing is so expressive that he needs only two or three notes to impress. He could overplay with, ahem, the best of them, but that’d be missing the point for him. The guy clearly understands every facet of what he does—he plays with astounding feel; his tone is immaculate; his command of effects use is total.

New York-bred Hamilton is a studied bassist’s bassist who unerringly knows exactly when to play exactly what, and, like Landau, he puts as much feel, power and finesse into one or two notes as he does into a light-speed flurry of them. And to see him play is a whole other treat in itself, because when Hamilton is immersed in a performance and his expression changes from one of focused concentration to a joyfully wide grin, his clear happiness in doing what he’s doing can be contagious, whether it’s before an audience of thousands, a small but packed joint like the Baked Potato, or the hallowed walls of Capitol’s Studio A.

The seasoned and uncanny musical telepathy that Landau and Hamilton share also extends to drummer Gary Novak, who, as several drum websites note, was “practically born with drumsticks in hand.” Novak was playing regularly with his pianist dad’s trio in Chicago jazz clubs before he hit his teens, and during high school he played with greats such as clarinetist Buddy DeFranco, vocalist Joe Williams, bassist Milt Hinton, guitarists Kenny Burrell and Barney Kessel, and drummer Louie Bellson.

Novak landed a touring gig with Maynard Ferguson at age 19 and has been busy and acclaimed ever since. He’s backed diverse artists including Anita Baker, George Benson, saxophonists Bob Berg and Brandon Fields, Natalie Cole, Chick Corea, Robben Ford, Allan Holdsworth, Chaka Khan, Michael McDonald, Alanis Morissette, Ozzy Osbourne, Lee Ritenour, David Sanborn, and many others. Behind the kit or even just drumming on the table with his fingers, his potent mastery of time, phrasing and dynamics is clearly evident, and he is the ideal rhythmic complement for Landau and Hamilton—or anyone he shares a stage with, for that matter. (originally written by Jeff Owens and posted on www.fender.com)